What happens when you're driving and you get a killer idea... and Kid C's First Funeral

Howdy.
Well, judging by the comments from Monday's post, I'd say my readers are back from their holiday break, and they brought some friends with them. Welcome!
Or maybe I just had a lot of comments because Josh Berk promoted my post by saying "Don't click if you're offended by the word 'booby'. " I'd totally click on that. I know a lot of you would too.


If that's how you found my blog, that works too. Welcome. Introduce yourself.
1. So, I've been really delving into my book lately because I want to send it to Sherpa Ted as soon as possible. This means I'm in the zone. Like, driving down the road, running red lights, striking stray soccer balls, squashing squirrels in the zone. (See? I wasn't even trying to alliterate. Boo Yah!)


Yesterday, while I was driving, I got a flash of inspiration, and I had to write it down before I forgot. Only it was a green turn arrow, and I had to push on the gas, plus steer the car. So I scrounged around for a piece of paper (a receipt) and, using the steering wheel as a desk, I wrote down my killer idea. The one that couldn't wait for a red light. The breakthrough. 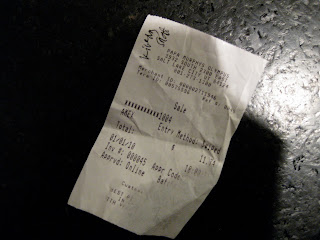 I picked up Kid B from his school and took him home, and in that short amount of time, my brain squirted out all its inspirational juices, and I blanked on my idea. Thank goodness I had the receipt.
I took it out of my pocket and this is what I saw: 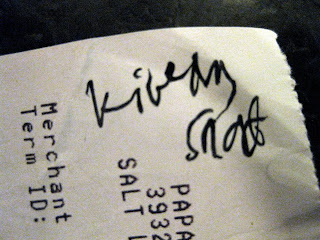 Any way I look at it, all I see are the words "kitchen snot".
Now, my blog may be full of snot and other bodily juices, but I know for a fact snot would not be appropriate for my novel. Especially kitchen snot. Come to think of it, I don't even think my main character has ever been in her kitchen.
Can anyone else figure out what it says? "Kibble Snat"? Does that ring any bells? "Kively Squit"?
I guess it doesn't matter if I'm awake or asleep. I still can't read my writing.
2. We went to Sam's Uncle's funeral on Saturday. Clifton was a good man, and we didn't want to miss it, even though it meant we had to take our kids.
As we were in line at the viewing, I tried to explain life stuff to Kid C.
me: "We're standing in line to see Uncle Clifton"
Kid C: "But I thought he was dead."
me: "He is, but we're going to see his body. It's not really Uncle Clifton, though. It's just his body."
Kid C: "Just his body?"
me: "Yep."
Kid C (giving me a horrified look): "Then what did they do with his head?" ...and then a little louder... "Where's Clifton's head?"
Yep. Kid C can be very literal. Next time, we're getting a babysitter.
So, what are y'all up to this week?
Posted by Brodi Ashton at 7:43 AM