Winner of The Dark Divine, and Happy Birthday Sam! Here's a Chia Obama.

And the winner of the signed copy of The Dark Divine is:

email me your address (email addy in side bar).

1. So, Sam got the coolest birthday present from his sister. Presenting... Chia Obama 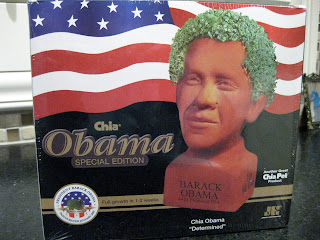 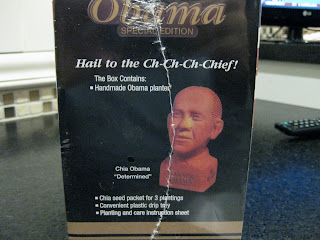 You can even choose between "Happy" Obama and "Determined" Obama. 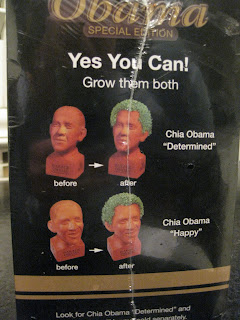 Personally, I think "Happy" Obama looks a little too much like George W. Bush. Like he's laughing at a dirty joke none of us heard.

Sam was excited to get "Determined" Obama, because considering the economy right now, it would be a little inappropriate if Obama was anything but determined.

2. Our three goldfish have gone to live on a farm. Not the one in the sky, but one right here on earth, where they can run and jump and there are no fences and no borders. Where they'll be happy, frollicking in the grass.

My friend Leisha said that sounds like an "All Kill Fish Shelter".

Anywho, we exchanged the three goldfish for one Betta (Kid C named him Chopie) and one little tiny snail (Quid. He wanted to name him Liquid, but we shortened it to Quid.) 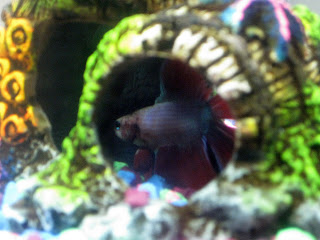 I am happy to be rid of the goldfish... I mean, to send them to the farm, because they are so darn dirty. And they're not the brightest bulbs in the fishbowl. We'd put them in another bowl while we cleaned the tank, and instantly that new bowl would be filled with poo.

Not only that, they kept trying to eat the poo, and then they'd hurry and spit it out. And they never learned their lesson.

They'd go around in circles, saying:

I'd stand over the fish bowl and yell, "It's all poo!"

And they'd see me near the bowl, and they'd assume I had just fed them, and they'd look around anxiously.

So, how's everyone else's week going?
Posted by Brodi Ashton at 8:34 AM