Thing 1
Um... evil Chopester died. And then our snail, Quid, died. Apparently we're the only ones in the universe who can't keep "unkillable" fish alive.
I was ready to pack up the aquarium and call it a life, but then Sam came home from the pet store with another one. We cleaned out the tank of death really well, and we used more bleach than ever, so our new little bugger, Chopes, would feel at home. Please don't report us to PETA. 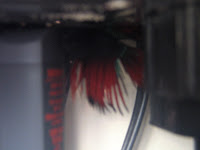 I'm trying not to get attached. Chopes will flare his gorgeous fins, and Sam will be all, "It's so beautiful!" and I'll be all, "Meh. Whatev's." and Sam's all, "Look at the fins...  they're like golden fiery spikes!"
Thing 2:
I went to Lindsey Leavitt's book signing for Princess for Hire. She did a great job- totally down to earth and delightful- and she had a great turnout. 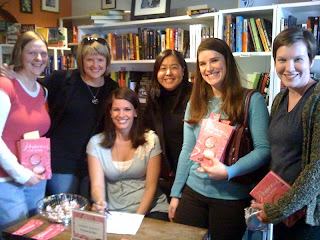 (Catie, me, Lindsey, Valynne, Emily, Sarah- who's book comes out April 17th)
She read from her book, and she also made little goody bags with candy necklaces and little tiaras. Several little girls showed up in full princess regalia. (Did I use that word right? Regalia? It doesn't sound right, and the more I look at it, the wronger it sounds...)
Afterward we went to the Dodo, where my mouth ran amok. As usual. This time the discussion started with the Chippendales vs. the Thunder from Down Under, and ended with me ranting about how the sexual orientation of strippers shouldn't shouldn't matter. 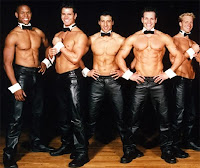 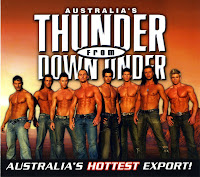 vs.
My impassioned argument was strange for several reasons because:
1. I've never been to either show.
2. I have no plans to go to either show.
3. So why do I care that the Chippendales look more feminine than the Thunder from Down Unders?
4. I mean, no one was arguing with me, and yet...
5. I kept repeating myself.
4. And my voice kept getting louder and louder and the nice women who were brunching right behind us looked disgusted...
5. Because women who "brunch" as a verb shouldn't be exposed to such filth.
6. Yes, I just said "exposed" while talking about strippers, and I just giggled to myself in my kitchen
7. And it comes full circle- I need to grow up.
8. That's what she said.
How was y'all's weekend?
Posted by Brodi Ashton at 9:23 AM