In Which I Actually Make a New Years Resolution... and Documentation of my Failure as a Housewife

I don't usually make very many New Years Resolutions. Can you imagine how depressed I would be at the end of the year if instead of just feeling like I didn't do a lot of stuff in general, I actually had a bullet point list of my failures? Talk about suicide by friction.

Anywho, I don't make a list. But I finished the complete draft of my new novel, and while my first wave of readers read it and mark it up, I had a few moments to look around my life, and the first thing I saw, I vowed to change.

Literally, it was the first thing I saw, because I was sitting on my couch and looking at the fireplace, and I saw the mantle. And the mantle is the perfect picture of my problem, the reason I'll never be a good housewife: 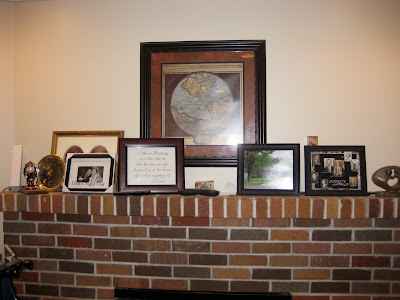 Up top, we have a framed map of the world, which is great because I love maps. (That should really go on the list of 25 things about me, but anyway...) But if you look closer, the map is wrong in so many ways. America's good, South America too... but then at the bottom of the world there's this blob of land, and I think it's maybe Antarctica, perhaps at a future time when it's about to take over the world.

And sorry to my friends around the world, but I don't see Europe, Asia, Africa or Australia. So, I'm proudly displaying either a map of the world on the day of Armageddon, or I'm displaying a map of Middle Earth, post ring, pre-hobbit.

Map discrepancies aside, my problem in my mantleplace really lies in the clutter. Take a look at the left side: 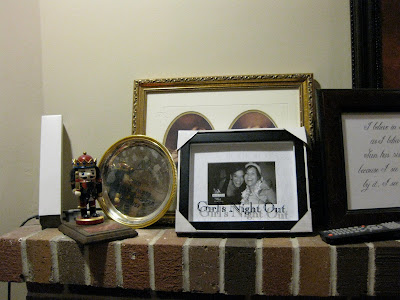 2. Nutcracker. It's there all year, not just for Christmas. And it's about to fall off.

3. Cheap silver plate, saying Hubby was a finalist in an Ice Breaker tennis tournament. Not to lessen his achievement, but this is tantamount to displaying a homemade blue ribbon that says my Hubby plays Ward Basketball, written in crayon.

4. This is my favorite. A framed Girls' Night Out picture. Don't those girls look like they are having the time of their lives, and thankfully there was a camera around to capture that moment? Only problem is, I don't know those girls. It's the picture that came with the frame. If you look closer, you'll see the box is still around the frame.

I didn't even bother to take the frame with the pic of the "fake friends, who are not me, on a GNO" out of the box. I just put it on my mantle, the place where you display your Artifacts of Precious to all the world.

People come over and say, "Aw, what a cute picture. You've changed."

And I say, "Well, apparently it was my wedding day, so that was a long time ago."

And they say, "You called your Wedding Day a Girls Night Out?"

And I say, "Makes you feel sorry for Hubby, Ha ha."

This. This folks, I would like to change. So, here's my first New Year's Resolution, written in big bold letters:

Before the Year is Out, I Shall Change out the Picture of "Random Girls", and put a Picture of Me and my Actual Girl Friends on a Girls' Night Out.

There. That should do it. Now it has to happen.
Posted by Brodi Ashton at 8:13 AM